The impact of BLS on beet and chard production can range from insignificant to complete loss of a crop. For example, in New York State in 2017, BLS was observed in 75% of the table beet crops surveyed, at an average incidence of 80% in these crops grown for harvest of the beet roots. In such crops, BLS can significantly reduce the amount of healthy foliage available for mechanized beet harvest by top-pulling machinery. At the end of the season, severe damage can result in a complete loss if beets are not pulled due to the foliage detaching, especially in waterlogged or rocky soils in late fall harvests.

In baby leaf beet and chard crops, BLS can result in rejection of entire crops because of the appearance of symptomatic leaves (Derie et al. 2016; Koike et al. 2003; Nampijja et al. 2021a, 2021b). In seasons with adequate supply of product, a baby leaf beet or chard crop may be rejected if >5% of the leaves have symptoms of BLS. The risk of BLS is very high in baby leaf crops because of the extremely dense seeding rates (up to 9 million seed/ha), frequent overhead irrigation, and very short duration to harvest with sequential plantings. In addition, up to 40% of the baby leaf beet and chard crops grown in the USA are certified organic, which limits the choice of products available to help suppress BLS.

BLS is common in many sugar beet production areas but typically does not cause economically significant losses (Jacobsen 2007). However, severe losses to BLS in sugar beet have been documented. For example, in 2013, BLS was observed in 25 commercial sugar beet fields in the Vojvodina Province of Serbia, at a range of 0.1 to 40% severity in these fields (Stojsin et al. 2015). Serbia is a major sugar beet production area in southeastern Europe. Sugar beet crops are dug, unlike many table beet root crops that are harvested by the tops, so the impact of BLS typically is less in sugar beet crops, but severe foliar infections can reduce photosynthesis and, therefore, root size.

BLS symptoms typically have not been observed readily in beet and chard seed crops, but detection of the pathogens on beet and chard seed has been increasing for seed lots grown in the primary regions of seed production in the world, including the Pacific Northwest USA (western Washington and Oregon), New Zealand, South Africa, Europe (Safni et al. 2016; du Toit and Bull, unpublished). During the 2019-2020, biennial season for production of table beet and Swiss chard seed, an extended period of cool and wet weather from spring through early July 2020 was associated with a very significant increase in prevalence of BLS symptoms in seed crops surveyed in western Washington. In comparison, a similar survey of a dozen beet and chard seed crops in 2015, one of the warmest and driest seasons on record for western Washington, failed to identify any BLS symptoms, and the BLS pathogens could not be isolated from any of the samples collected.

Seedborne infection by the BLS pathogens results in an important inoculum source for disseminating pathogens and establishing infection in the crops grown from infected seed lots. Planting infested seed can result in 100% crop loss under favorable conditions for the pathogen. 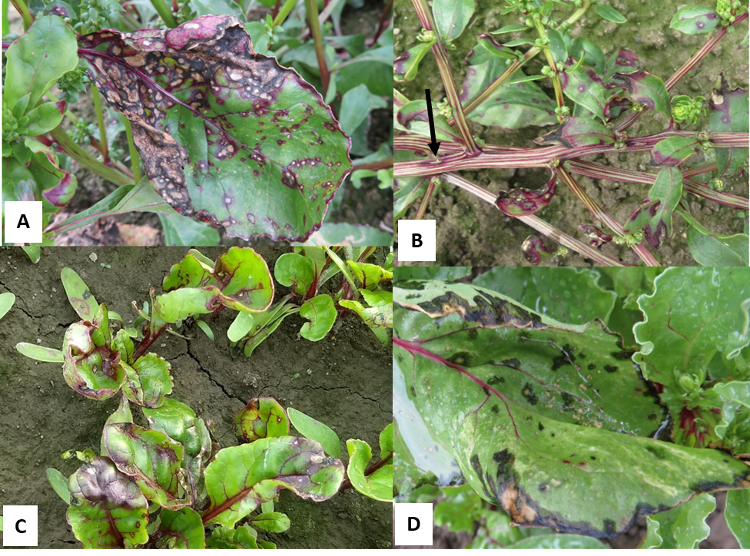 BLS of beet and chard are caused predominantly by two main genotypes closely related to Pseudomonas syringae pv. aptata and P. syringae pv. atrofaciens within P. syringae sensu stricto (in the strictest sense). Read more about the taxonomy of the pathogens causing these diseases here.

The bacteria that cause BLS are readily seedborne and seed transmitted in beet and chard, but there has been limited research on seedborne inoculum thresholds for the disease (Derie et al. 2016). The disease tends to be more severe in ‘baby leaf’ crops as a result of very dense seeding rates, overhead irrigation, and the short duration to harvest (25-40 days from planting to harvest) with adjacent, sequential plantings over an extended period. Seed transmission has been assessed in a series of field experiments (Derie et al. 2016; Crane et al. research in progress). The BLS pathogens are splash-dispersed by rain and overhead irrigation. The bacteria can exist epiphtyically on leaves without causing symptoms until conditions are favorable and the pathogen population has increased considerably, making it difficult to know when the bacteria might have established in a crop. The bacteria can enter leaves through stomata, hydathodes, and wounds from mechanical injury, insect feeding, or chemical damage. BLS is most prevalent and severe during wet and cool to warm (10-25°C) conditions, although the bacteria have been documented to grow at a temperature range of 2 to 35°C. Besides seedborne inoculum, the pathogens can survive in surface irrigation water, which can contribute to outbreaks of BLS. In addition, partially buried, infected beet and chard crop residues from previous crops that remain exposed on the soil surface can be a source of inoculum.

Effective management of BLS necessitates an integrated management program that includes cultural practices and, potentially, application of bactericides (Franc et al. 2001; Jacobsen 2007; Nampijja et al. 2021b; Nikolić et al. 2018a). Since there are no systemic, highly effective bactericides for control of BLS, cultural practices are extremely important for limiting losses to BLS. There are currently no highly resistant beet and chard cultivars available commercially.

There are no systemic, highly effective bactericides for control of BLS of beet and chard.